The Taïeb and Castro families in service of entrepreneurship

In less than 50 years, they have built the MOBILITAS Group, a mid-sized company with international DNA. Joëlle Castro, a member of the MOBILITAS Group Board of Directors, is the newest inductee to the International Association of Movers’ (IAM) prestigious Hall of Honor. The induction ceremony took place during the association’s annual forum on 14-15 October 2021. This is a new distinction for the MOBILITAS Group, which has always relied on the talents of its people, who come from all countries and all generations. 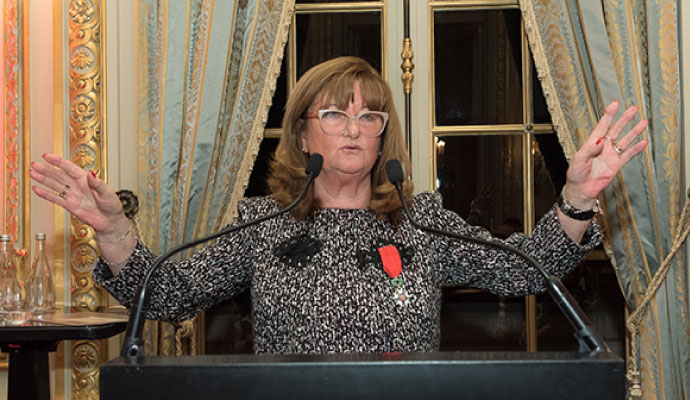 After receiving the Légion d’Honneur in 2019, this accolade from IAM is another acknowledgement of Joëlle Castro’s unique career. Beyond her professional activities, which led her to hold numerous positions within the family-owned MOBILITAS Group and to be a member of its board of directors since 2016, she is above all a woman dedicated to social causes. She has been involved in numerous initiatives in the removals industry and other sectors for many years. In particular, Joëlle Castro founded the Val d’Oise Women Entrepreneurs Network in 2013 and participated in the creation of the Latin American & Caribbean International Movers Association (LACMA) Women’s Group in 2014. Within the MOBILITAS Group, she has always advocated for the employment of young people, in particular by contributing towards the development of the French International Internship Programme (known in France as VIE or Volontariat Interionational en Entreprise).

Alain Taïeb, Chairman of the Supervisory Board of the MOBILITAS Group, is also an inductee of the IAM Hall of Honor, having received this esteemed distinction in 2012. Alain Taïeb has always made service quality, customer relations and the family values of the MOBILITAS Group a high priority. On his initiative, the group joined the United Nations Global Compact, which calls on companies to align their strategies and operations with the universal principles of human rights, the environment, the fight against corruption and the advancement of societal goals.

As a foreign trade advisor and recipient of the National Order of Merit in 2010, he has always sought to contribute to the influence and  promotion of French companies abroad. Notably, he was instrumental in founding EFE International in March 2021, a French company of which the shareholders, foreign companies set up abroad by French citizens, have access to VIEs and, in future, other services previously beyond their reach. A pioneer in African markets, Alain Taïeb set up the Africa54 project in 2016, making MOBILITAS the only French company with a presence in all African countries. As chairman of the supervisory board, he steers the group’s strategy and diversification policy.

MOBILITAS, expansion and diversification as sources of resilience

Founded in 1974 by Isaac and Sarah Taïeb, and today directed by their grandson Cédric Castro, son of Joëlle Castro and Chief Executive Officer, the MOBILITAS Group has always structured its development with an eye to the future. This has allowed the company – a specialist in the international mobility of goods and people and in physical and digital records management – to undergo considerable transformation in less than 50 years.

This growth is the result of a strategy built on two strong axes: geographic expansion and the development of new markets and businesses – an approach which has seen the once small business rapidly become a mid-sized enterprise, where long-term thinking remains the philosophy that guides all operational, structural, tactical and strategic decisions. In 2020, the group had to reinvent itself and learn to live and work in a world that has been totally disrupted and is undergoing rapid change. This ability to bounce back, as well as the group’s strong resilience, are the results of a long-term vision, one which is also reflected in the expansion and diversification of its activities.