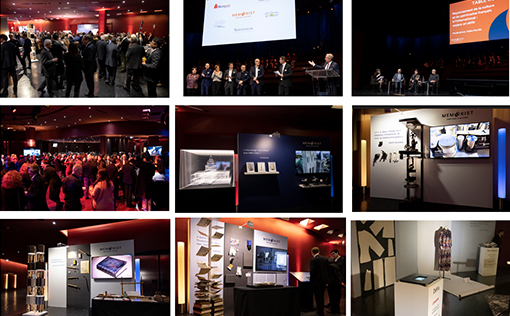 The Memorist launch also granted heritage preservation experts a platform to discuss the issues and challenges facing the influence of French culture and heritage internationally.

Speeches by Jérôme Bastianelli, Director of the Musée du quai Branly – Jacques Chirac; Cédric Castro, Chief Executive Officer of the MOBILITAS Group; Laurent Onaïnty, CEO of Memorist; Aurélien Lechevallier, Director General of Globalisation, Culture, Education and International Development at the Ministry for Europe and Foreign Affairs; Nathalie Bondil, Director of the Museum and Exhibitions Department at the Arab World Institute; and Alexandre Michelin, founder of the Knowledge IMMERSIVE Forum (KIF), underscored the importance of heritage preservation and of French expertise in this field, which is recognised worldwide.

The Memorist logo is featured on the front pages of the Journal des Arts and The Art Newspaper, and the brand is the subject of a digital campaign.

The MOBILITAS Group and all the Memorist partners are delighted with the success of the “Gala des patrimoines”, the quality of the debate, the presentations, and the relationships that were forged on the night.

The launch was well supported by French institutions and the private sector, a testament to the vitality of the French cultural sector. Memorist, strengthened by this success, intends to continue to assert its leading position among the creative and cultural industries in France and internationally.

We would like to thank the companies who have come together under our common brand for their commitment to making Memorist the global leader in the heritage industry. Our teams’ enthusiasm is a credit to their profession and greatly contributed to the success of the launch.