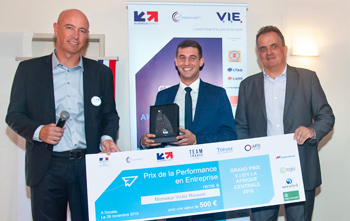 Victor Roussel, a Volontaire International en Entreprise (international corporate volunteer) at AGS Douala in Cameroon, won the Performance and Integration category of the Grand Prix VIE Award for Central Africa on 26 November 2019. The Awards ceremony was held at the Consul General’s residence in Douala.

International corporate volunteering is a civic service developed and managed by Business France. It gives young French people or nationals of the European Economic Area, between the ages of 18 and 28, the opportunity to go on a professional mission to French companies established abroad, for periods ranging from 6 to 24 months.

The AGS Group first began recruiting VIEs in 1999. Over the past 20 years, AGS has welcomed more than 300 young graduates, with 11 currently in office (seven in Africa and four in Europe). Many VIEs remain at AGS once they have completed their assignments, going on to become branch managers or executives. This Award was created to honour the most promising VIE in Central Africa. It is organised by the Foreign Trade Advisors of France (CCEF), in partnership with the Business France Central African office and the teams of the Regional Economic Service.

Candidates are evaluated on how well they have integrated into the host country, how well they have adapted to the new framework, their performance within their host organisation, and taking initiative within the company and in the country. (picture : 2019 Grand Prix Award finalists (Victor Roussel 3rd from the right)

Several awards were given:

Victor holds a master’s degree in Business Engineering. After two work experiences in France, Victor decided to continue his professional life abroad to acquire international experience and discover a different culture. International corporate volunteering was an ideal option for him.

Victor received the Performance and Integration Award for his professional skills, his ability to adapt, the quality of his relationships with clients and his seriousness in his work. He has been creative in carrying out his assignments and has proved to be a real asset in achieving the objectives of the company.

An asset to the AGS team

His passion for developing relations with the expatriate community of Douala quickly led him to join the DROP, the Douala rugby club, and to organise events around this sport. He also created a group of scouts for expatriate children.

International volunteering in Africa represents less than 10% of the VIEs around the world, a statistic that disappoints Victor: “It is a pity that Africa is not the continent of choice for most VIEs. To complete a VIE mission in Africa enables candidates to gain responsibilities very quickly. You also face more obstacles on a daily basis, which forces you to develop your adaptation and management capacities quickly.”