In Qatar, an ancient tradition gets a futuristic makeover on the back of a camel. 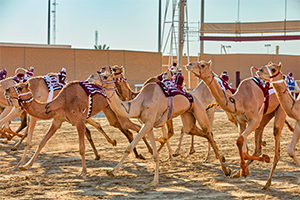 The Qatari people have been racing camels for millennia. The age-old tradition is extremely popular and takes place at Al Shahaniya Camel Racing Track every year from October to February.

What makes the races unusual is that the camels are mounted with robots and controlled remotely by their herders.

The robots have replaced child jockeys, who were commonly used until 2005, when Qatar and the EU took measures to outlaw the custom as it violated human rights laws.

A modern solution to sustain an ancient culture

Camel races keep local traditions and folklore alive while celebrating the significance of the camel in Arabian history. Domesticated animals enabled early Arabs to explore the deserts of the Middle East, develop and dominate ancient trade routes, and establish trading centres in northern and central Arabia. They were also a vital source of food, wool, transport and wealth.

The sport of camel racing can be traced to the 7th century, where it started as a form of entertainment at weddings. Today, Qataris can still enjoy one of their favourite pastimes thanks to the addition of a little modern technology.