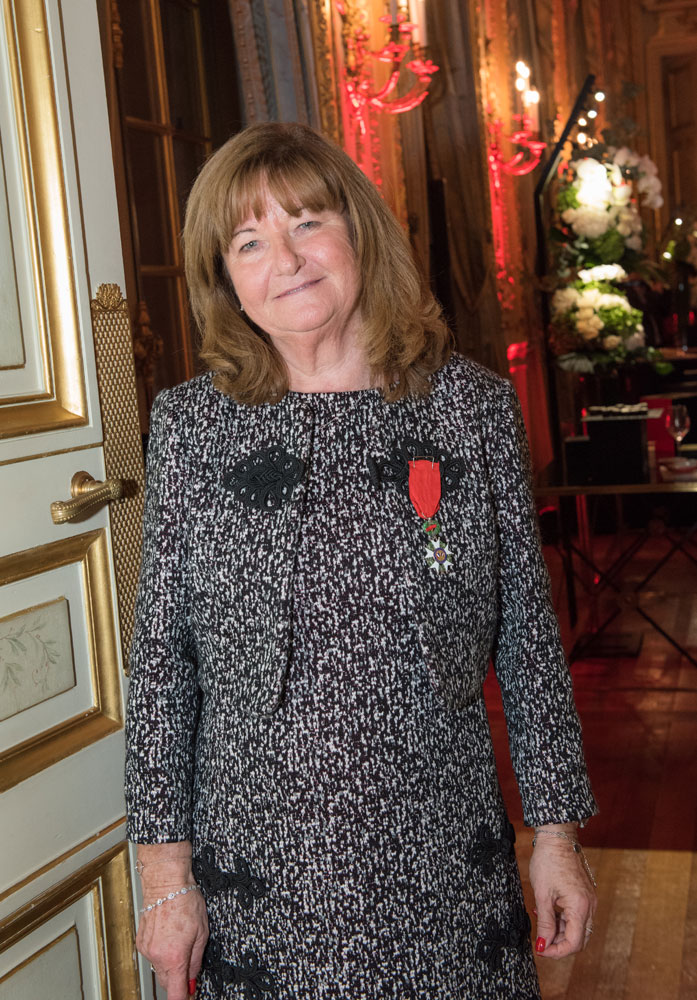 On 22 October, Jöelle Castro, Director of Mobilitas, the group that embraces such iconic industry names as AGS, Stuttafords and Pelichet, was presented with the award Chevalier of the Legion of Honour by the French government. I was keen to learn more about her work and why she had been honoured with her country’s ultimate accolade.

The Legion of Honour is the highest French decoration and one of the most famous in the world. For two centuries, it has been presented on behalf of the French Head of State to reward the most deserving citizens in all fields of activity. The status of Chevalier is the equivalent of a Knighthood in the British awards system.

I don’t mind saying that I was a little intimidated when I made the call.  The moving industry is not peppered by such highly-decorated people and I didn’t know quite what to expect.  But Jöelle was as charming, gracious and modest as you might expect her to be, whist clearly displaying the dedication and resolve that had created her success and that others had recognised over so many years. I often think, when I meet successful people, that it’s instantly clear why they have achieved so much. I felt the same when I interviewed her brother, Alain Taieb, earlier this year: Jöelle was the same. Jöelle’s list of achievements is extensive and I wondered if the honour had been bestowed because of a lifetime of undeniable achievement or for a specific role. She said that it was for several things “Not just running a successful company”, but it was her role as a French Trade Adviser that had been pivotal.

Jöelle had met with trade advisers, which she called “absolutely fantastic and dedicated men and women”, during a trip to India.  With her company already being represented worldwide it was obvious to her that she was able to help other French companies that were trying to break into those markets.  Since then she has mentored a range of companies helping them towards international success. “I think the government appreciated the work I do for these companies to help them open up around the world,” she said.

The need to train the next generation of managers has been a key focus for Jöelle and she has dedicated much of her time in recent years towards helping the Volunteer for International Experience (VIE) scheme, run by the French Trade Commission, to help young people gain valuable international work experience. Since it started in 2001 around 40,000 people have joined the scheme with 300 of them subsequently taking up positions with the Mobilitas companies.

Jöelle is involved with many initiatives both within the moving industry and elsewhere.  She was, for example the founder of the Women Business Leaders Network in the Val d’Oise region of Paris in 2013.  It’s an organisation dedicated to the helping women start their own businesses. “It’s very different for women,” she explained. “Women feel they have to work twice as hard as men to be recognised in business.  I don’t know why, but it’s true.”  Jöelle said that she felt the climate for women in business was improving. “Step by step this vision is changing.  In France today 30% of companies now have female managing directors.”

Similarly, Jöelle worked closely with Evelyn de Jean at LACMA to create the LACMA Ladies’ group in 2014.  The group works to discuss business and the moving industry while working hard to organise fund-raising events during the LACMA conference that raise money for local children’s charities. “At first some of the men wondered why we needed a ladies’ group, but I think they are now beginning to understand.” Jöelle also gives her time to help other children’s charities in France.

In her acceptance speech in the Napoleon Room at the Shangri La Hotel in Paris, Jöelle thanked Geoffroy Roux de Bézieux, whom she called her ‘Godfather’, the president of MEDEF, a leading network of French entrepreneurs, who presented the award; Alain BENTEJAC, President of the CNCCEF (National Committee of Foreign Trade Advisers); and Michel JONQUERES President of MEVO (Mouvement des Entreprises du Val d’Oise). She said it was they who were responsible for her receiving the award.

She also thanked her husband Ronald; her family including her son Cedric Castro, the current chairman of the group who, she said, has been infected with the ‘Mobilitas virus’; and all the men and women of the Mobilitas group who have participated in the ‘success of this adventure’. “You are all in the spotlight tonight and this distinction is also yours,” she said. The spotlight also fell squarely on the elegant frame of her mother, Sarah Rosette Taieb who, with her late father André Isaac Taieb, had started the AGS business in 1974 and had, she said, “passed on to us their moral values, a sense of satisfaction for a job well done and effort rewarded, a keen sense for commerce and the ambition to succeed.” I wondered how Jöelle found the time to do all she does while still playing her part in the family business.  “I’m hyperactive,” she said.  I suspect that must be a necessity.  I wondered too whether she had expected an award for the work she had done. “No, it was a complete surprise,” she said. “I didn’t do any of this for an award.  For me it was so natural to do what I have done. I asked Alain why he thought I had been nominated for the award.  He said it was probably because I was a good cook!”

Does being a Chevalier of the Legion of Honour have any practical benefit? Does it open doors? “When you have this award it’s very easy to speak to everyone in the government,” said Jöelle.  “They respect you more.” I am guessing that should Jöelle be using her new status to pull any high-level strings, they will be exclusively for the benefit of others.

An award for everyone

The official presentation was a memorable event for Jöelle, and the whole of her family.  But she said that the best part had been the reception that was held the following day at the AGS office in Paris for staff and industry colleagues. “We couldn’t invite everyone of course,” she said. “But it was lovely to spend some time with my business family and let them share in the moment.  This is a family business and despite everything that has happened, I’m still a mover at heart.  That’s why I love this business so much.  The award is for all of us.”